In “Toothbrush People,” American college students participating in the Semester at Sea program reflect on a person they encountered on their voyage that especially impacted them.

Here’s one story shared by Christina McQuire on the Spring 2010 voyage.

While in Japan, I visited the city of Hiroshima. It was an emotional day — seeing the “A-bomb dome” that is still standing, visiting the children’s memorial, and spending time walking through the museum. After I had gone through the museum, I decided to walk through the Hiroshima Peace Park and spend some time in reflection. I heard a beautiful voice singing in Japanese. It was coming from a middle-aged woman sitting on a park bench. I st down on the bench next to her and listened to her song as I gazed around the beautiful park. 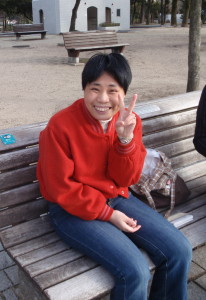 I was filled with a sense of peace. It was hard not to feel a sense of peace – the entire Hiroshima memorial was focused on peace. Instead of focusing on war and blame and the atrocities that had happened, the memorial was about world peace and what could be done to achieve it.

I smiled at the woman next to me and she smiled back with warmth. As she finished her song, I continued to look at her and said “hello” to her in Japanese. She came over to me beaming and put her hands on my face. She said “hello” back to me and then kissed me on the cheek. She pulled some candies out of her bag, graciously offered them to me, and gave me a hug before she went back to her bench and began another song.

This woman epitomized the meaning of the Memorial and the emotions behind it. She showed me the true meaning of peace and gave me a glimpse of what a peaceful world could look like. I don’t know her name, and I know know a thing about her life, but I often wonder if she is back on that park bench, brining peace to others as she brought to me.

Learn more about at the book here.