One of 39 Stories from Toothbrush People 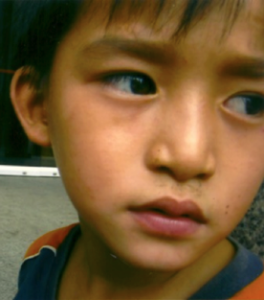 Tao found me in Ho Chi Minh City, on the steps of an old building in the central city. I remember it as a cathedral, with a huge staircase in front.

I was waiting to meet a friend on the stairway to plan our afternoon in the city. This tiny boy with floppy brown hair skipped up the steps and sat down next to me, pointing at my camera and making funny faces. He spoke enough English to compensate for my complete ignorance of Vietnamese, and introduced himself as Tao, asked to play with my camera, and wanted to take pictures. Tao moved like he was full of light, like he didn’t need to think to run.

I was in a daze. That morning, I had gone to the American War Museum, in part to pay respects as an American, not realizing that you can’t pay for respect in a situation like that.

I paid an entrance fee, paid for books sold by a veteran in the courtyard, paid what I thought I could as an American surrounded by pictures of devastated fields, starving children and murder. When my dad was just a few years older than I was on that day, he had lived outside Saigon in Army barracks as a helicopter pilot in the Vietnam War. We had Vietnamese art on our living room walls. He’d never made a big deal of his time there and didn’t let it define his life,only showing me his slides the day before I left for SAS and saying what a beautiful country he’d seen. There was a helicopter in the museum’s courtyard — this place was part of my history, too.

Tao found me later on those steps and stuck out his tongue, crossed his eyes for the camera, laughed when he saw the pictures on the screen. He made me smile too, then snuggled his head on my shoulder when he saw tears come to my eyes. When my friend Lacy met us, he took one of each of our hands and swung to jump down the steps, suspended between us. “Be careful,” he told us several times. He took us through the market around the city, I don’t remember exactly what we did all afternoon, but I remember that he kept smiling, asking to take pictures, pointing out parts of his city that we would never have noticed.

We stopped for an ice cream cone and Lacy and I took out our wallets to pay. Lacy’s traveler’s checks were gone. Tao didn’t run away, he just looked around and put his hands in his pockets. “Be careful.” In his pocket, I saw a wad of checks Tao was holding onto that he’d taken from Lacy’s bag. He gave it back and said simply, “Sorry.”

“Be careful,” he said to us–I wish I could say we’d done the same for him. I know we bought him a meal, we asked if wanted anything, we gave him some money to take home – but in the end he left for home and so did we. I wish I would say that we’d both given him all of our cash, knowing we had a free meal on the ship and plenty of souvenirs already. I wish there was some way to start to even out our lives. Need was not an issue for us in the way it was for Tao. I remember that we weren’t mad, but we both inexplicably felt hurt. How could we possibly have felt betrayed by someone we’d just met,by a child who clearly needed money more than we ever would?

When Don asked us to write our toothbrush letters in Core, I wrote about Tao and a woman I’d met in Lençois, Brazil. I think of them both when I remember Semester at Sea for reasons that I think are different but complementary, mixed up in a way that reminds me of that time. I remember sharing absolute contentment with an older woman in Lençois, regret and sorrow with a small boy in Vietnam. And I remember feeling joy with people on opposite sides of this world.